Oral Presentation
Room: 517C (Palais des congres de Montreal)
K. Pierce1, S. James2, E. Bacon1, E. Skepnek2, E. Leuthe2, C. Barnes1, D. Cha1, L. Outhier2, L. Lopez1, S. Nalabolu1, C. Pham1, V. Gazestani3, A. Cheng1, A. Moore1, E. Courchesne3 and C. J. Smith2, (1)Neurosciences, University of California, San Diego, La Jolla, CA, (2)Southwest Autism Research & Resource Center, Phoenix, AZ, (3)Neurosciences, Univeristy of California, San Diego, La Jolla, CA
Background: Because many children with ASD begin to show observable signs within the first year, there is an ethical demand for early detection and intervention. While we and other University-based studies have shown that ASD can be detected as early as 12-18 months using parent report screens at well-baby check-ups, surprisingly, the mean age of ASD detection in the US is several years later, around 4 years. CDC studies report this age as even later at 56 months in Phoenix. To address this gap, we created a standardized early detection program within the University of California, San Diego, named Get SET Early, which expands on our previous work. Our approach incorporates new elements including a triple screen at 12, 18, and 24 month well-baby visits, and tracking of pediatrician diagnostic impression and referral habits (Figure 1). The goal of the model is to reduce the mean age of ASD detection and treatment referral to be between 12-24 months as standard of care.

Objectives: (1) To determine the feasibility of instituting the Get SET Early model, initially created within a University setting, within in a community center in Phoenix; (2) to examine program metrics such as mean age of first comprehensive evaluation in Phoenix in comparison to CDC statistics, and in comparison to our university-based program in San Diego.

Methods: A community–based center in Phoenix (i.e., SARRC) was selected to implement the Get SET Early model. The program was established in 2014 by creating an early ASD diagnostic center within SARRC, establishing a network of 109 pediatricians and training them to use a screening tool, the CSBS, and by providing San Diego-established GET SET Early program materials and data collection mechanisms. Once a toddler was referred to the program, he/she participated in an evaluation that included the ADOS, Vineland, and Mullen and referred for immediate treatment as appropriate. Program metrics included number of screens administered, age at first diagnostic evaluation, number of toddlers identified with ASD and other delays, and age at last (most recent) diagnosis.

Results: Within just 4 years, 45,289 screens were administered at 12, 18, and 24 month well baby visits. Within toddlers screened at 12 months, the mean age of dx evaluation and treatment referral was 14.78 months. Overall, 520 screen-detected (Figure 2), and an additional 65 toddlers that fell outside validated screen age were evaluated. Within this final sample (N=585), 251 toddlers were diagnosed as ASD, 96 as ASD Features, 71 as LD, 106 as DD, and 61 as false positive (i.e., TD) at their last evaluation. The overall age at first evaluation was 21.8 months, which is similar to program results in San Diego, and is 3 years lower than the CDC reported age of 56 months.

Conclusions: The Get SET Early model can be easily implemented in regions with late detection ages. Although the program was established in Phoenix just 4 years ago, it has had a major impact on lowering the first age of diagnosis and treatment engagement by around 3 years. 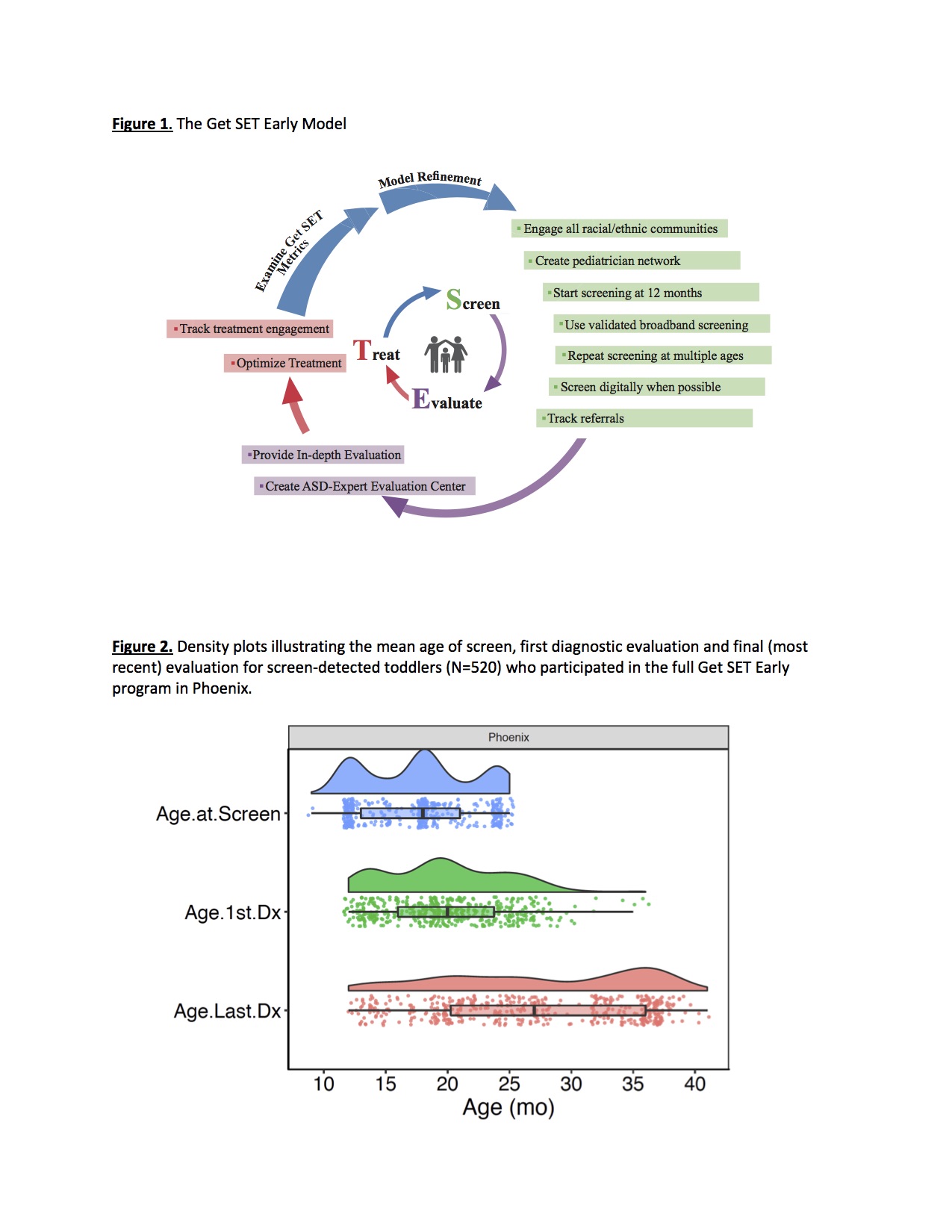