Objectives: To evaluate sex/gender differences in symptom presentation within a minority sample of Hispanic preschool-age children referred for diagnostic evaluations.

Methods: The overall sample is comprised of 153 children between the ages of 2 and 5 who were evaluated at an University-based specialty diagnostic clinic as part of a services grant for children suspected of having an autism spectrum disorder. Children at risk for ASD based on screening results were referred directly through local Part C and Child Find services and were either (1) Medicaid eligible or lacking private insurance (2) Head Start or Early Head Start eligible or (3) zoned for a Title 1 schools. Current analyses include only those children who received diagnoses of ASD and who also identified as being of Hispanic descent (n=89, 58% of initial sample), resulting in 43 females (48.3%) and 46 males (51.7%), with a mean age of 45.94 months (SD=9.71) and nonverbal IQ of 72.18 (SD =24.59).

Results: Females were significantly younger at referral (MF=43.23 vs MM=48.43 months), t= - 2.583 (87), p=.011. Age and nonverbal IQ (NVIQ) were significantly correlated, but only for males (r =.337, p=.022). Patterns of correlations between age, nonverbal IQ and outcome measures differed for females vs. males (see Tables 1-3). Due to this, MANOVAs and MANCOVAs were conducted to test for differences between females and males across the various symptom measures, with age as a fixed factor; age and/or NVIQ as entered covariates, depending on the pattern of correlations observed.

Conclusions: Male and female Hispanic children are more similar than different on the majority of measures. However, some differences were found with respect to age of referral, clinician ratings of ASD symptom severity, communication abilities, parent reported behavioral symptoms, and patterns of comorbidity. Implications of these findings for the diagnostic and treatment process will be discussed. 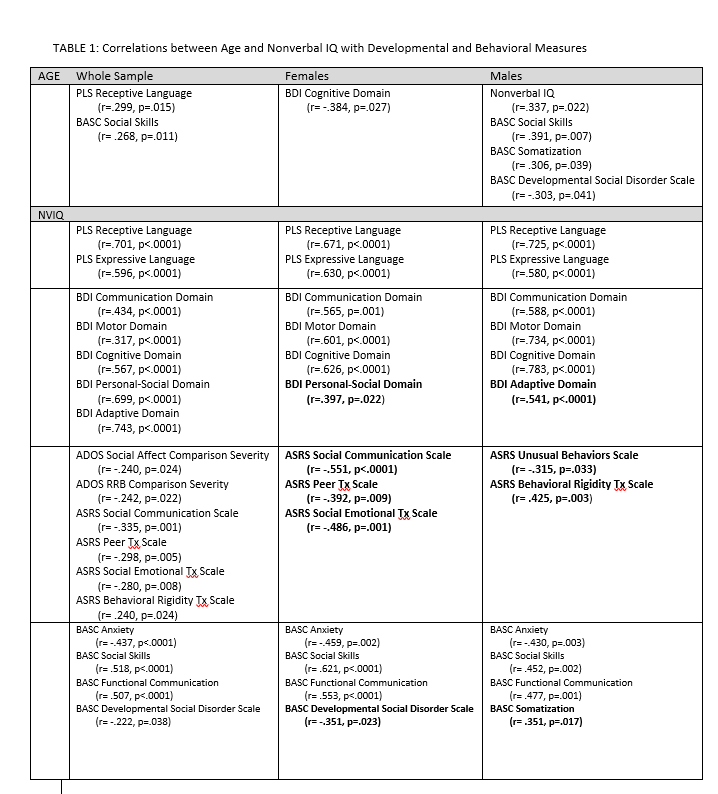