30436
Sex Differences in the Sensitivity, Specificity, and Diagnostic Cutoff of the Childhood Autism Spectrum Test (CAST) in Israel

Poster Presentation
Room: 710 (Palais des congres de Montreal)
S. Israel Yaacov1,2, N. Shachar1 and O. Golan1, (1)Department of Psychology, Bar-Ilan University, Ramat-Gan, Israel, (2)Association for Children at Risk, Givat-Shmuel, Israel
Background: The past decade has seen a shift in the understanding of the different clinical picture of Autism Spectrum Disorder (ASD) in females. Due to various factors, such as test sensitivity and female camouflaging effect (Lai et al., 2011), females on the more functioning end of the autism spectrum have often been missed out (Loomes et al., 2017). It is therefore important to examine the sensitivity of ASD screening instruments separately for boys and girls. The the Childhood Autism Spectrum Test (CAST; Scott et al., 2002) is an ASD screening instrument that has been widely used in the UK (e.g. Allison et al., 2007) as well as cross-culturally (Morales et al, 2017; Sun et al., 2014; Vulchanova, et al., 2016). However, the instrument’s cutoff has not been tested separately for boys and girls.

Objectives: The current study aimed to test the sensitivity, specificity and diagnostic cutoff of the CAST in Israel by comparing a clinical sample of boys and girls to a typically developing sample.

Methods: Participants were 295 children, aged 6-12. The clinical group included 101 children: 79 boys (age: 9.08, S.D.=1.97) and 22 girls (M=9.36, S.D.=1.89), recruited through a tertiary ASD clinic, who were clinically diagnosed, based on the ADI-R and the ADOS-2. They were compared to 194 typically developing children: 102 boys (M=8.86, S.D.=1.98) and 92 girls (M=8.88, S.D.=1.94), recruited through internet forums and reported to have no neuropsychiatric diagnoses. Participants’ parents filled out the Hebrew translation of the CAST. The clinical cutoff, sensitivity and specificity of the CAST total score were calculated separately for boys and for girls. A calculation of the cutoff for the entire sample was conducted after partialling out some of the typically developing girls sample, to ensure m:f proportion is similar in the clinical and the typical groups.

Conclusions: Our examination of the CAST demonstrates the need for separate cutoffs for boys and girls. By employing a joint cutoff, there is a risk of missing out girls whose presentation of symptoms may be more subtle, or camouflaged. Interestingly, despite the lower cutoff for girls, it still allowed for better discrimination between ASD and TD, than the cutoff for boys. It is important to note that our sample of girls with ASD was relatively modest. Further studies should examine different cutoffs for girls and boys on the CAST, as done for other screeners, such as the SRS-2 (Constantino & Gruber, 2012). 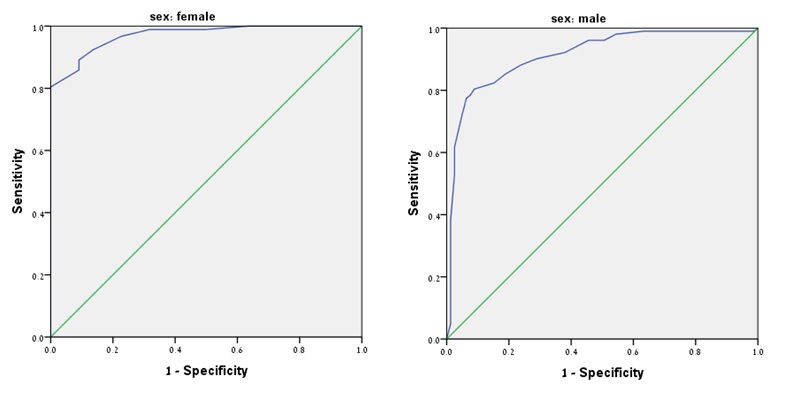